skip to main | skip to sidebar

A cold and joyless place where little changes and all wait with sullen eyes until the end times for release from grim stagnancy.  No, it's not Mist-Land, it's this blog.

But today, I bring forth a new post, roughly forged and hurled from the tongs into online existence.

So.  Those resolute and hammer-hearted souls who order the Barbarian Lord graphic novel can claim for themselves a free limited signed and numbered print through the publisher, Clarion Books.  It's free.  It's easy.  It's grim.

It comes to you delivered by a live and furious wolf.

But ere the print could be placed within the slavering jaws of the wolf, it had to be created.  Here is some documentation of that process.


Here is where you must go if you wish to greet the angry wolf and pry this free print from his hall of jagged teeth.  See the site for details, fill out the form and await the howls! 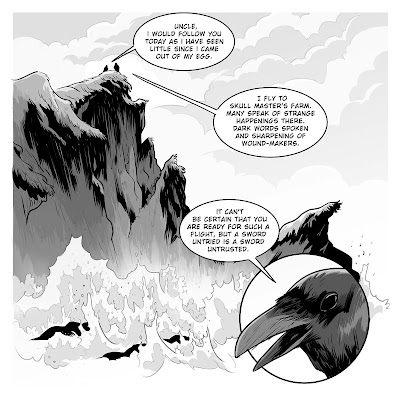 I've been better keeping up on Barbarian Lord's developments elsewhere.  Here's a new post to attempt to bring this blog up to speed.

The Barbarian Lord graphic novel has been completed and will be released by Houghton Mifflin / Clarion Books in spring 2014.  It hovers somewhere around 180 pages and marks the first full length story.  The following are mostly in-progress pages and sketches from 2011-2013.
The graphic novel began with the idea of 5-6 single issues under the name of Barbarian Lord: Outlaw, to be released on no fixed schedule -- planning to write it as I went along.  Some time after the first issue was released, the plan changed to release the story in a single volume.  This meant time put aside to concretely work out the entire story (hazy at best initially), write dialog and sketch it out.  Between drawing the first issue and really getting down to tackling the story as one whole, some of the character designs slightly changed and general stylistic developments came about.  Much of the original content of first Outlaw issue is in the beginning of the graphic novel, but slightly reworked and with some additional pages added in.

Once the initial storyline was worked out, the book was sketched out in 2x2 thumbnails.  These were then scanned and used as the base for tighter "pencils" done in Corel Painter.  Lastly they were given final linework and graytones also in Painter or Photoshop.


With all that said, here are a few more images of the book as it came along...

The Draugr started as an 8-page story for Fubar: By the Sword #1.  I fleshed it out a bit more to 20 pages for a stand-alone issue, though retaining the same basic story, with the idea of having it ready for the MICE 2013 comics expo.

It was somewhat of a challenge to use what I had for Fubar as there was a page size discrepancy.  Fubar's pages being a bit taller and much skinnier than the usual stout BL format.  A couple of initial sketched pages which I had cut were re-added to the new version and in general, by adding a panel here and there and slowing the pace of the story a little, I found I could work 2 pages from each original page.  The hope is that they both work in their respective formats.
Also included are 3 pages of guest art from barbaric illustrators Mister Reusch, David Tilton and Nathanial Hamel.

A copy of this issue can be ordered at
http://barbarianlord.com/
and comes with an 8x8 print with one of five possible
grim musings of Barbarian Lord.
Thanks to Jeff McComsey and Jeff McClelland of Fubar!
Posted by Matt Smith at 8:33 AM 1 comment:

"You've been determined to meet me, Barbarian Lord." 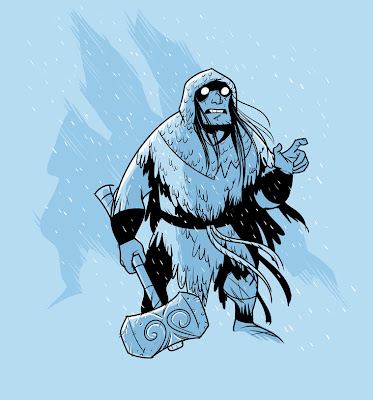 Posted by Matt Smith at 7:47 PM No comments:

A new short collection of Barbarian Lord stories as exchanged between a wolf and a raven. 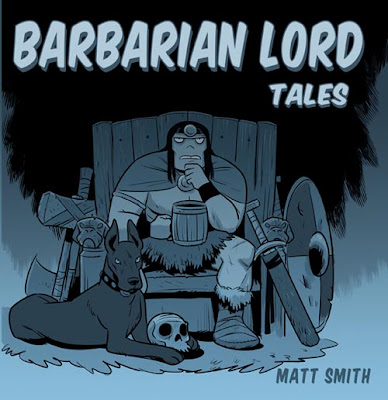 Remaining copies available through the Barbarian Lord website, barbarianlord.com
or directly at:
http://barbarianlordstore.bigcartel.com/product/barbarian-lord-tales
Posted by Matt Smith at 8:24 PM No comments: 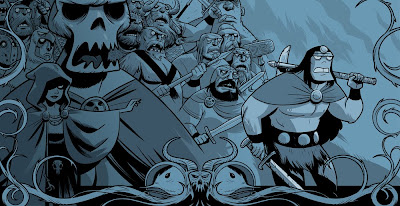 Sharing shelf space next to Conan at Million Year Picnic in Harvard Square.

Currently the one place where Barbarian Lord is available.

Also, the version of the cover art for a print I've been selling at 3 recent comic conventions.
Posted by Matt Smith at 9:04 AM No comments:

Matt Smith
A blog to keep my illustration chums abreast of continuing experiments and sketches, share methods and process, and just to be able to say I have a blog. you can see more stuff at: matt-illustrations.com and barbarianlord.com